Evansville residents gathered tonight outside the Winfield K. Denton Federal Building to hold a vigil for Ricky Ard who was murdered earlier today by police.Approximately sixty people attended the spontaneous vigil, which was organized by word of mouth and social media. Although no centralized group took responsibility for organizing the event, the group appeared unified in their message that Ard’s murder was unjustified.

Poster at the vigil reads “Rest In Power Ricky Ard 8.29.2017” (Photo: Where the River Frowns)
Attendees lit candles, wrote messages in chalk on the sidewalk, talked about their experiences with police brutality, and exchanged contact information throughout the night.Those who knew Ard shared stories about him. A woman who said she had known Ard her whole life said that he was a good neighbor and a kind man who often helped out elderly people in their neighborhood. She also said that he was physically disabled and suffered from some kind of mental illness.

Another Evansville resident who recently retired from the military shared his experiences as an Iraq War veteran. He said that his “rules of engagement” during active combat in Iraq were more restrictive than those followed by the Evansville Police Department and that, had he been confronted by a man swinging a baseball bat in Iraq, he would have been expected to use non-lethal means of disarming him.

One woman demanded that police release body camera footage of the shooting and led the group in chanting “show me the body cam!”

Those present at the vigil discussed meeting up tomorrow, Wednesday, August 30, at 11 a.m. outside the federal building for a rally in protest of Ricky Ard’s murder. 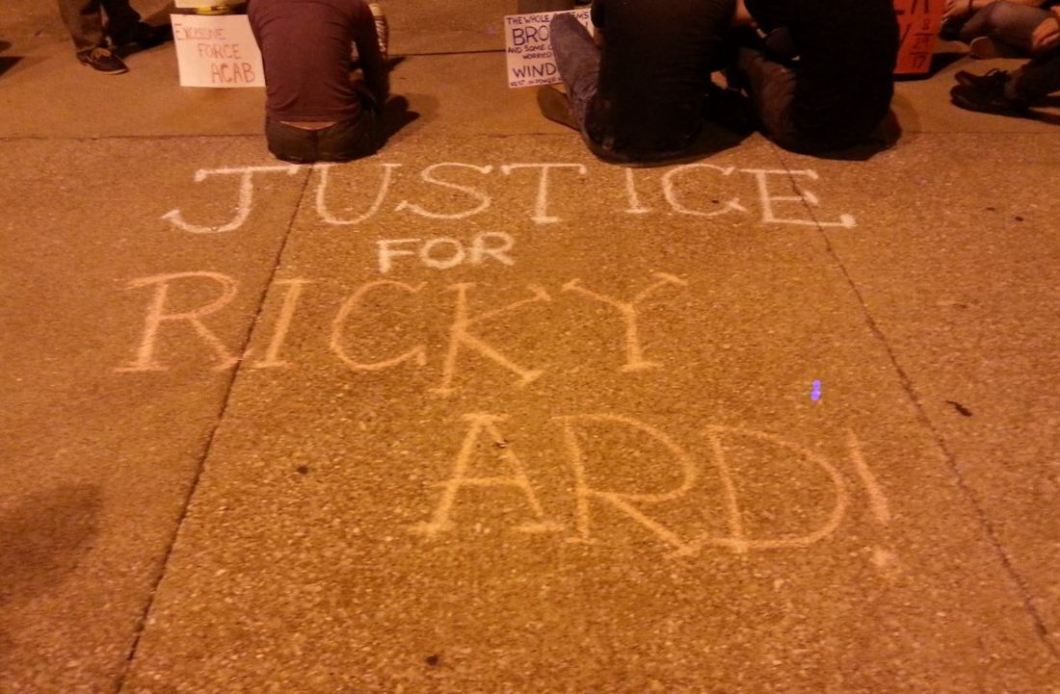 Sidewalk chalk outside the federal building reads “Justice for Ricky Ard” (Photo: Where the River Frowns)

Sidewalk chalk outside the federal building calls attention to police murders across the U.S. this year (Photo: Where the River Frowns)

Poster taped to a light post outside the federal building reads “Show me the body cam” (Photo: Where the River Frowns)

Poster taped to a post outside the federal building reads “E is NOT for everyone. RIP Ricky Ard” (Photo: Where the River Frowns)